Whatever your level this question may arise, for some you have a little idea, for others you start from scratch. Today I will try to give you as much information as possible to find sponges on Minecraft.

On Minecraft, sponges are found in ocean monuments at the bottom of the oceans.
Each monument has a sponge room, placed differently in each monument.

In this article I will make a reminder about sponges, then we will see how to find ocean monuments, and finally, where the sponge rooms are.
I will also give you another way to get sponges.

The sponges in Minecraft

In this first part, I will start with a reminder about sponges in general, how to get them and what they are used for.

Ways to get sponges

To get sponges, there are two methods.
But in both cases you will have to find an ocean monument, we will come back to it later.

The first method is to find the sponge rooms in monuments.
There can contain one or more rooms depending on the case.
In each room you will find about 30 sponges.

A second way is to kill the elder guardians, who will give you a sponge when you kill them.

Sponges come with two different variants: dry or wet.
The sponges can be baked in an oven to dry.

Only dry sponges can remove water.

Simply put your dry sponge where it is intended.
The surrounding water will disappear, and the sponge will now be wet.

This is very useful for example when exploring ocean monuments, in order to be able to breathe at several points.
And if you empty the water of the entire temple you will not be too bothered by the guardians.

Everything you need to know about ocean monuments

Ocean monuments (or temples) are already existing buildings in Minecraft (a bit like desert temples).

You will find ocean monuments in the deep oceans.
They are generated close to the center of the biome and are usually laid on the ground or not very far, they are never buried.

From 1.13, the monuments are a little more discreet, but still easy to see.
You won’t usually miss an ocean monument if you pass nearby, it is much bigger than a desert temple and is surrounded by guardians.

An ocean monument is a maze in which you will find a main entrance then corridors, rooms, a treasure room and sponge rooms (we’ll come back to this later).

Each ocean monument is different, so it is not possible to give you a plan of attack, and that each monument is explored in the same place (unlike a desert temple).

Once you have found an ocean monument, you will have access to a bunch of blocks available only in temples: 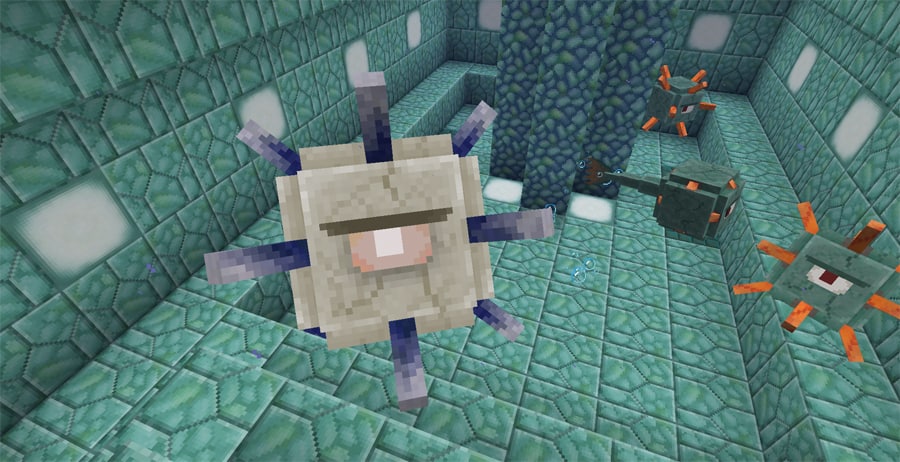 A room with a former guard

Finally the ocean monuments also allow you to unlock two successes, I let you discover them.

There is not really a miracle technique to find the ocean monuments.
If you are lucky to be close to a village, look if by chance there would not be a cartographer villager (white costume).
Against a few emeralds, it will give you an exploration map that can indicate the location of an ocean monument.

Otherwise, the best method is to explore the oceans by boat searching for a deep point that could accommodate a temple.
These may take some time, be patient.

I managed to find two in less than an hour by writing this article, so it’s still reasonable 🙂

Finally, I offer you a summary of the information to know to find the sponge rooms once the ocean monument is found.

How often in Minecraft, there is theory and practice.
In reading the wiki you will say to yourself: “Great, it’s easy!”
And then once there nothing will go as planned, you will die 10 times or find nothing that fits the description 🙂

In short, the theory tells us that the central section of the ocean monuments is composed of an arrangement only of rooms and that each temple is different.
Some monuments can contain from one to several sponge rooms, and others do not have any at all.

Surviving in an ocean monument

In practice, the first problem is going to be not to die 50 times while exploring the temple.
Whether by drowning or by mobs, death quickly occurs.

To avoid drowning, the best solution I’ve found is to take a few torches in your action bar.
By placing them against a wall this will give you the ability to breathe and raise your oxygen bar.
This goes down very quickly, think about always having an eye on them.

You can also consider aquatic breathing potions, but their effect will disappear with each bucket of milk you drink (see next paragraph).

Then you’re going to have to fight two types of problems with mobs:

I don’t know if it’s the ideal inventory, but it’s certainly the one I’m trying to get before I venture into an ocean monument:

If you have any other stuff ideas to add, tell me in the comment, I’ll add later.

Once you’ve prepared all this, it’s time to take action.

At the beginning I advise you to enter from the top of the ocean monument.
In breaking a block on the ceiling of the monument in the center, you will find the first former guardian.
Once it is eliminated, move very quickly to find and eliminate the other two.

Once the bosses are eliminated, it will be much easier to move around and break the walls.
While your quick turn of the ocean monument, note important places like the treasure room or sponge rooms that you may have come across.

I don’t know if one can make a generality, but in the monuments I looked at for writing this article, the layout was always as follow:

So I advise you to:

Here are the steps in pictures, this will probably be clearer.

Obviously if your current equipment doesn’t break all the ceilings quickly, you can just break a few blocks here and there.
The rooms go about 8×8 so breaking a block every 4/5 blocks should suffice.

I hope that these cutting images will have been useful to understand everything, if you still have doubts do not hesitate to ask the question in the comments.

Once the ocean monument emptied of its sponge rooms and treasure room, are there other interesting things to recover? Not really, you can eventually turn it into a fish plant by removing all the water and leaving only a layer to the surface, but this is rarely useful off server.

There you go, you now know everything there is to know about sponge hunting in Minecraft. Obviously, by exploring other temples you can increase your supply of sponges, which is interesting for big projects (it avoids drying them every time).
But most of the time one or two looted rooms are enough for a whole game , no need to set foot there again 🙂

My name is Patrick, I'm linked to the Minecraft game for 10 years! Player, developer and server owner. I share everything I know on this website.

link to How To Make a Minecraft Server Less Laggy? (13 Ninja Tips)

Minecraft servers are software that is not optimized for performance. They consume a lot of RAM, solicit the disk and operate in a single-thread.Server delays are therefore frequent, and this can...

Continue Reading
link to How to Make a Windows 10 Minecraft Server For Free?

At some level in Minecraft, every player dreams of creating his own Minecraft server to play quietly with his friends or family. Unfortunately, not everyone has the finances to afford to pay for...

My name is Patrick, I'm linked to the Minecraft game for 10 years! Player, developer and server owner. I share everything I know on this website.